Ham Radio has allowed me to do something that not many people can claim…and that is to combine three hobbies to achieve something very useful!

My local flying club had a need for near real-time weather information for their flying site.  Unfortunately (as is the case with *many* R/C club flying sites) the site is in a rather remote location and “off the grid” with no way to have power or Internet connectivity.

This was a perfect application of APRS (Automatic Position Reporting System).  Those of you associated with Ham Radio probably know all about this; for those not familiar…

APRS is most commonly used by amateur radio operators as a means to track or identify the position of fixed (or moving) vehicles.  It uses radio (usually the 2 meter ham band) to transmit a short burst of data which can get routed to the Internet, allowing public display of maps with the associated “target”.

One variation of APRS allows a fixed location to transmit weather information for a specific site.  This was exactly what our club needed…but there were still some challenges to be met, primarily that of full-time power.

One of the recent advances in the R/C hobby was the development of high-discharge rate batteries which would allow for high performance electric motors to be used in model aircraft.  Up until around 2005, most model aircraft were powered by nitromethane “glow” powered engines…the loud raspy sounding engines you may have heard from schoolyards and flying sites.  Electric flight has brought a whole new era of model aircraft power into being.

Along with electric flight came a new challenge.  How do you recharge batteries to allow more than one flight?  The first and most wide-spread method was from 12 volt automotive batteries…the car or truck that you drove to the flying site!  While that worked very well, as time went on a better solution was needed.

Inexpensive solar power panels have now become available for use that will keep a high capacity automotive or deep discharge marine battery constantly charged…and that solves several problems!  It allows for the flyer to recharge his flight batteries AND it can supply a constant source of power for a full-time weather station.

Various companies produce weather stations for home/hobyist use.  Almost all equipment provides for APRS operation by supplying a serial computer port from which streaming weather data is available.  A special electronic circuit is used to convert this data stream into an audio signal that can be transmitted by an inexpensive 2 meter handheld transceiver.  Here are some pictures showing “Installation Day” of the weather instrumentation at the flying site: 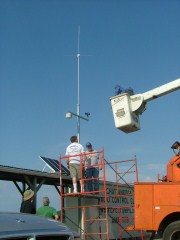 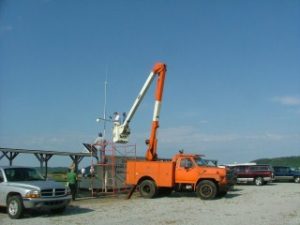 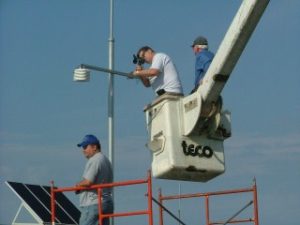