Working Satellites with an HT and Arrow Antenna

It’s really cool to be able to point your antenna up in the sky and receive signals from some invisible source.  There are all kinds of variables though, that make it extremely challenging (at least for me!)  You’ve got to know:

As you can see…there’s quite a bit of information that must be juggled.  Some of them can be *slightly* forgiving…but by and large you’ve got to be on top of every item if you want to successfully “work a bird”. 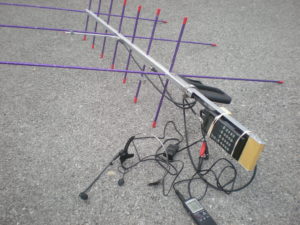 I’m using an Icom IC-W32A handheld.  This is not state of the art as far as a radio is concerned, but it’s one of the few radios that allows “full-duplex” operation.  This means that you can be transmitting on the uplink frequency while listening to yourself and others’ audio on the downlink frequency.  (Assuming of course that you are “tracking” the satellite fairly accurately across the sky!)

(Edit: 4/28/2012) – The above arrangement just did not seem to work out for me.  I suspect the problem was in the radio…not sure.  I never did make a successful contact with the above setup.  I have since changed directions and started using two separate Yaesu HTs, one for the 2 meter uplink and one for the 70 cm downlink.  Also (you may not be able to tell from the picture above) I had a hardwired arrangement feeding the audio recorder and Icom headset/mic combo.  I’m no longer doing that either.  I just have the recorder held to the frame near the downlink radio with rubber bands and allow it to pick up through its regular internal microphone.  Much simpler…nowhere near as many wires!  Only the downlink radio is attached to the antenna frame as you see in the above picture.  I just hold the uplink HT radio in one hand and the antenna in the other.

This new configuration resulted in several QSOs (my first ever!) the first time I tried it.  I was ecstatic!  I was *not* in my normal QTH which probably contributed greatly to my success.  I was on the Florida panhandle coast and had a direct shot at the birds as they topped the horizon from the south…no doubt before the usual pileups could get established.  I had never been able to make myself heard before.

In order to keep standard audio feedback from producing the typical squeal that you hear when a microphone is too close to the speaker it is driving, most people use a mic/headphone combo.  Also, to help with logging, most people like to use an inexpensive audio recorder.  That way you don’t have to fumble with writing down QSO details while you’re holding the antenna, tracking the bird, keying the PTT to transmit, adjusting the radio frequency to compensate for Doppler shift….

There are a lot of sites that provide valuable information on working the satellites.  I’d like to acknowlege one in particular.  I found it rather awkward to hold the Arrow antenna using the supplied foam grip.  While the foam made it somewhat comfortable in your hand, you still had to rotate your wrist at an uncomfortable angle (for me, anyway) to point the antenna.  I stumbled across Clint Bradford’s site, K6LCS.  I learned a LOT from this site:  www.Work-Sat.com.  In particular, his Arrow antenna modification is perfect for solving that uncomfortable wrist position!  Take a look at his mod at:  http://k6lcs.com/k6lcs/Photos/Pages/Arrow_Mod.html 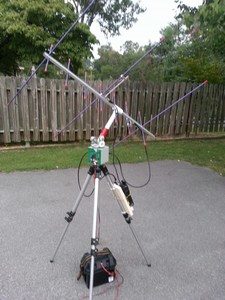 FT-817nd radios with the “WRAPS” Az/El rotator.  This rotator was described in the January 2014 issue of QST.  Click here for the original article.

A high quality PC board is available from AMSAT. Click here for info about the PC Board. (Edit 10-15-2018 This PC board is no longer available.)

AMSAT also has some very good software to do your SAT tracking and serve as the Az/El rotor tracking controller.  Click here for info on SATPC32.

This particular view shows only one of the Yaesu 817nd radios…the other came a bit later after this picture was taken.  It is simply stacked on top of the first using a bungee cord. 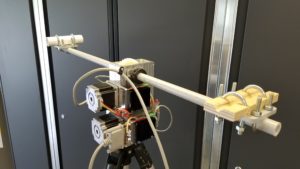 (Edit 10-15-2018) After a fairly long hiatus from working satellites, I’ve gotten much more involved.  I evolved from the WRAPS rotor to the much more sophisticated CNCTRK rotor (by Bob KI4SBL) and finally now to no rotor at all.  Unbeknownst to me, I had some kind of strange issue with the split boom on my Arrow which played havoc with making good satellite contacts.  I think maybe there was some kind of electrical inconsistency with the small section of copper pipe that is inserted into the aluminum boom.  To make a long story short (not really!) I rebuilt the boom with square aluminum stock from Home Depot, making it a single piece boom.  The difference is night and day!  Had I known what was going on with the antenna I probably would have kept the CNCTRK rotor!  It is an amazing design…too bad Bob is no longer producing the kit.